Red Chair is a genre defying performance written and performed by Sarah Cameron. Told in a rich Scots dialect, you can see it at Stratford Circus.

NuSound Radio 92FM met up with Robert Mountford who is playing the title role in what many people call Shakespeare’s “Scottish Play”.  Reset in a modern day British Asian family, you can see the play at Stratford Circus. 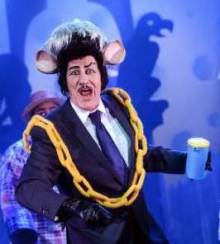 The Theatre Royal in Stratford always put on a great pantomime at Christmas.  This year its Dick Whittington, the young lad with a cat who ended up being Lord Mayor of London.  But who was Dick Whittington ? And are there any parallels with the modern day mayors of London and Newham ? NuSound Radio 92FM met up with King Rat AKA Michael Bertenshaw to find out.

NuSound Radio 92FM invited Shawab Iqbal from the Theatre Royal in Stratford to talk about the Home Theatre project, where performances will take place in peoples homes – Broadcast 22/08/13

Hardeep Singh Koli, writer, broadcaster and comedian, talks about his production “Kanjoos” .  Based on “The Miser” by 17th Century French writer Moliere its set in Mumbai and you can see it at Stratford Circus – Broadcast 28/02/13

Glasgow Girls at the Theatre Royal in Stratford is a musical that in the tradition of the theatre is both challenging and entertaining.   It’s based on a true story of how a group of Glasgow schoolgirls challenged both the authorities and also some members of their own community, over the deportation of asylum seekers – Broadcast 21/02/13

Babel, a promenade performance staged in Caledonian Park in Islington.  Including performance by the Stratford East Singers – Broadcast 17/05/12